The truth about who reads your resume – and the tricks to impress them. 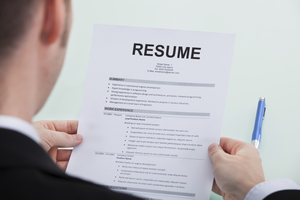 Of course jobseekers want to impress whoever reads their resumes, but they probably don’t give much thought to the actual individual. They don’t try to picture that person, let alone put themselves in her shoes. Perhaps they should. After all, this solitary gatekeeper determines their fate.

Don’t be a clueless jobseeker. Here are 12 things to understand about the person reading your resume.

• They would rather be doing something else. Managers reading your resume have more pressing things they could be doing. HR folks “have looked at 500 resumes already in the last two hours,” says Kent Burns, president of Simply Driven Executive Search, a Sanford Rose Associates firm based in Indianapolis. They simply aren’t jazzed about your resume – unless you give them a reason to be.

• They don’t want you to succeed. “Recruiters have so many resumes to review for any given role that they are seeking to disqualify you as quickly as possible,” says Scott Shearin, president and CEO of Veteran Talent Advisors in Loveland, Ohio. “They’re not carefully reviewing your resume.”

If you want that kind of consideration, “something has to stand out on your resume to grab their attention within the first five seconds,” he adds.

• They want your help eliminating you. Hiring managers prefer a simple, straightforward design and a chronological presentation of your work history so they can see at a glance the specific information they use to disqualify candidates. However, this same format also helps the qualified candidate pass the glance test, says John Herath, director of human resources at Orion International recruiting firm headquartered in Cary, N.C.

• They’re suspicious. If you omit dates or use any other format besides reverse chronology, including a functional resume, they probably will assume you are hiding something like a gap in employment, Burns says.

• They don’t actually read; they scan. “Recruiters and hiring managers don’t have time to read paragraphs. Even if your experience history is nuanced and complex, stick to bullet points,” Shearin advises. It’s a challenge, but in this format you must highlight the value you created at previous companies. A prospective employer doesn’t care if you supervised a group of seven at your last job, so don’t waste a bullet on that. But if your team brought in new business worth $7 million, that employer will give your resume a closer read.

• They don’t care what you want. Don’t include an objective; they have fallen out of favor. Start with a career summary or personal branding statement instead.

• They do double duty as an ad writer. Chances are that the person reading your resume is the same person who wrote the ad or post for the job opening. Study the ad carefully and include the same keywords in your resume, Herath advises. The person will be looking to have his own words reflected back to him, not out of vanity but because he thinks he wrote an accurate job description and is seeking a good match on paper.

• Errors will pop out at them. “There is nothing that will eliminate a job candidate faster than typos,” says Mary Massad, recruiting services division president at Insperity, an HR solutions provider. “Be sure to proofread everything very carefully for correct grammar, spelling and punctuation” and have a second set of eyes do the same.

• They’d rather not see you. While some HR professionals don’t mind them, others think headshots on resumes make them more vulnerable to accusations of discrimination by turned-down applicants.

• They won’t read your cover letter. Because companies receive so many resumes, cover letters generally are not read on the first pass. An employer might read yours eventually, but only after your resume has made it through a few screenings. Herath recommends including a cover letter anyway to complement your resume. Just don’t count on the letter to convince employers of your worthiness because they won’t read it until they already like you as a candidate.

• They may not be human. Online applications and resumes submitted electronically are often scanned by a computer program and given grades before a human lays eyes on them. Use keywords from the job description for a better shot at advancing.

• They reward responsiveness. When employers follow up with applicants, “The first one to pick up the phone or answer the email is going to be in the best position to move forward in the hiring process,” Massad says.